What makes Montana so compelling to an outsider? Where to start? Wide-open spaces, blue-ribbon river, stream and lake fishing, world-class skiing, and ice climbing — in fact, world-class recreation during all four seasons. Plus, there’s clean air, small-town friendliness, and a sense of “home” that many visitors say they’ve never experienced in other states.

The first “Journey to the West” had its beginnings when Bozeman was settled by homesteaders and became the epicenter of the gold rush, along with nearby Virginia City and surrounding gold fields. The fertile Gallatin Valley produced many different types of foods and vegetables and it became the garden community that provided produce for the thousands of people seeking fame and fortune searching for gold. As Bozeman began to prosper, several sectors in the economy dominated. Agriculture was number one, followed by education, health, and business, all of which resulted in the founding of Montana State University and Deaconess Hospital. The community grew at a slow steady pace for the next century. As time progressed tourism became incredibly popular in Bozeman and by the late 1980s the city experienced clusters of high-tech development in photonics, biomedical, and computer technology — thanks in large part to research at Montana State University and by local entrepreneurs.  This attracted yet another new wave of businesses and employees, namely those who could use their science and computer skills and live in Montana instead of Silicon Valley.

In the early 90s, Bozeman changed once again following the release of a movie based on a Norman McClean’s book “A Rivers Runs Through It.” The 1992 blockbuster created great excitement for the beauty, splendor, and recreation of Montana. Anyone could visualize themselves fishing on that large rock in the Gallatin River, enjoying the solitude and peace that came from living in a place with low density and beautiful recreation. So began the “Journey for Solitude.” Montana, especially
Western Montana, experienced exponential growth. Newcomers sought a change of pace and place and yearned for the solitude represented by that iconic motion picture.

Bozeman experienced a very stable economy in the early 2000s and was a logical place for relocation after the events of 9/11. What became evident during that time was the confidence of the American people had been shaken. Those who could live outside of areas that appeared to pose a high threat to terrorism sought a protective and safe environment in which to raise their families and in which to live in work. I called this relocation a “Retreat to Safety,” and the growth that occurred in Southwestern Montana between 2001 and 2006 was unprecedented.

This growth continued until the stock market crash, national recession, and bank failures that began in September 2008. Because Bozeman had been growing at such a rapid pace there were many developments and construction projects in progress, some of which were highly leveraged.  With severe market corrections, the community was faced with many foreclosures and bankruptcies. The recession caused many people to realize that if they were unemployed and starting over to rebuild their portfolios, they might as well live where they wanted. The flight capacity at Bozeman-Yellowstone International Airport expedited the ease with which someone could live and work here part-time or full time.

This timeframe also produced a new wave of in-migration. This growth was driven by the belief that Montana real estate was a safe, secure investment and a great place to live, retire, or vacation. Bozeman, Big Sky and Whitefish experienced a large second home/vacation home movement. Many of those with the financial means sought legacy properties designed to accommodate multi-generations — and be held in the family for generations to come.

The most recent events of COVID-19 have created a “Flight from Density” wave.   During the past several months, we have seen densely populated metropolitan communities highly impacted by the virus.  There is a strong trend of families and multigenerational families making the decision to relocate in search of a less dense environment. This trend is occurring all across Western Montana and is being driven primarily by buyers from major cities such as Seattle, Los Angeles, and New York.

When Montana implemented several restrictions for tourism at the onset of the virus, the implications of a lack of visitors engaging with the real estate market remained a big question. As we continue to navigate through the re-opening of Montana, we now have approximately two months of real estate data to analyze since the initial shelter-in-place directive.

With such a large state as Montana, it is encouraging to see that every major community reports positive metrics in their real estate markets during the past couple of months. Almost all markets saw increases to both their units closed and their median sales price compared to the same time period from 2019. This is according to data from the Multiple Listing Services in Gallatin County & Park County, Billings, Missoula, Flathead County, and Helena from March 16, 2020, through May 15, 2020. 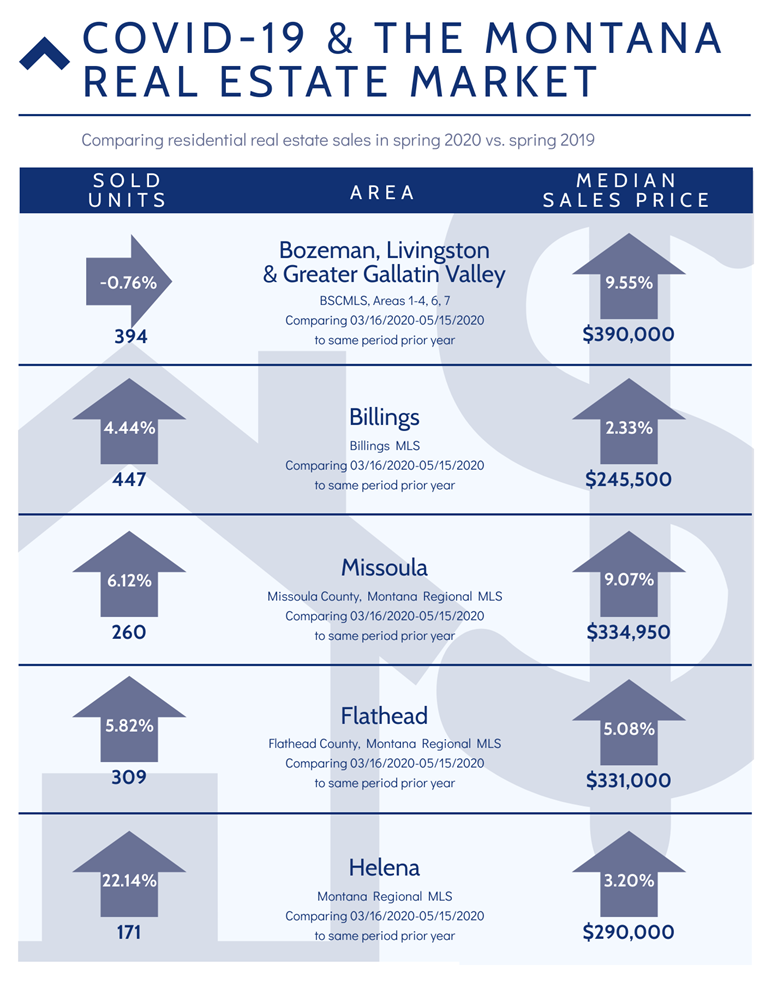 It is significant that closed units stayed strong and property values did not decrease as this gives us a positive real estate outlook for the summer months.